More on the screw saga later. We left this morning in a pace line group of 9. Without a whisper of wind and the next town, Logan 24 miles away I set our pace at a snappy clip. We held 22-24 mph very easily as everyone’s legs felt fresh even after yesterday’s 110 mile. It was almost no effort at these speeds as I kept my heart rate around 95 -97. It was like cheap Aunt Jemima syrup flowing over a buttered flap jack. Look out Texas, here we come, man it’s flat here ! Like a band of misfit Spandex Cowboys we rode. All day long the drivers were great yielding over to the middle lanes giving us plenty of smooth delicious shoulder. It was a Merle Haggard, George Jones kind of day.

We stopped at the bullet ridden Texas State monument. I carry my I-pod and remote speaker in my top tube bag for entertainment. I know playing music isn’t cool to some cyclists but in the right place and time our group is having fun with it. So I cranked up some Dylan in honors to Bobs birthday and off we go.

So all is back and we’re still grinding along around 18 with some tailwinds. So then WHAM, a grotesque metal on metal loud mashing sound and a loud blow out. My rear wheel blew up! Luckily I’m the last in line. I stop and see a screw imbedded in my tire but can’t take the tire and tube off cuz it’s completely embedded IN my rim !!! This ones a first, and I have to work to just remove this ugly spike. It was a mind blower I have a hole inside my rim like a spoke hole with no spoke. So our sag van stops and I throw on my now 3 rd new tire and 10th tube. Everything is back ready to go and before I straddle the bike, pppassss it flats. So our sag truck now pulls up and they give me a staff members rear wheel and off we go, back in the saddle again.

Outside of Dalhart, our destination for today we start to smell the famous XIT feed lots. We were told we’d smell them before we saw them. So now we begin  to see what at one time was 3 million acres !  Of cows in feeding parcels. Dalhart is all Texas and all about cattle. I was now pretty sure we wouldn’t see Tofu of Condor burgers on the menu tonight.  Talk about cow central, this is where they are feed before they get trucked elsewhere to meet their maker.

Every night at 5:30 we have a group route rap meeting to go over the next days ride in detail. We are told in Guymon Ok tomorrow’s destination there’s a bike shop. BUT it might be open or it might be closed. It seems this bike shop owner is also a lawyer so if he’s in court the shop is closed !  You gotta love small towns.

So here I sit in Texas tonight and without a DVR I can’t decide what to watch, Green Acres, Hee Haw, or the Beverly Hillbillies. Or I could take a walk and count cows. Boy Texas is another planet for sure.

Several days back we’re at a sag stop and up walks Richard a really great guy from the UK. He spots a basket of scones, which it seems he really enjoys at home. But to his dismay, he sees no cream. He asks me where the ” cottage cream is”. So I ask, “do you mean cream cheese or cottage cheese? ” no cottage cream, it goes nicely on scones with jam”. Yep you guessed it Sir Richard as I call him is the same guy who hadn’t ever eaten a PB&j. Then we smell a skunk odor coming for the forest around us. Richard gets excited as he says he’s never smelled a skunk ! You gotta love the Brits. It’s so fun having them along on this trip, never a dull moment. So we go about eating our scones sans ” cottage cream”.

Tonight walking to dinner you can see the storm cloud formations to our east. We are still in the dry famous Dust Bowl but those clouds look mean. Tonight’s weather is nothing but 100% tornado information and stories. We ride towards the wetter weather tomorrow. Today was a 97 mile ride with only 2400 ft of climbing. Tomorrow is 77 miles and the elevation profile looks like a ton of flats and decents. Oh boy tomorrow’s going to be a party. Unless the winds change. I honestly can’t fathom doing these distances INTO headwinds. We’ve been blessed by the weather gods so far 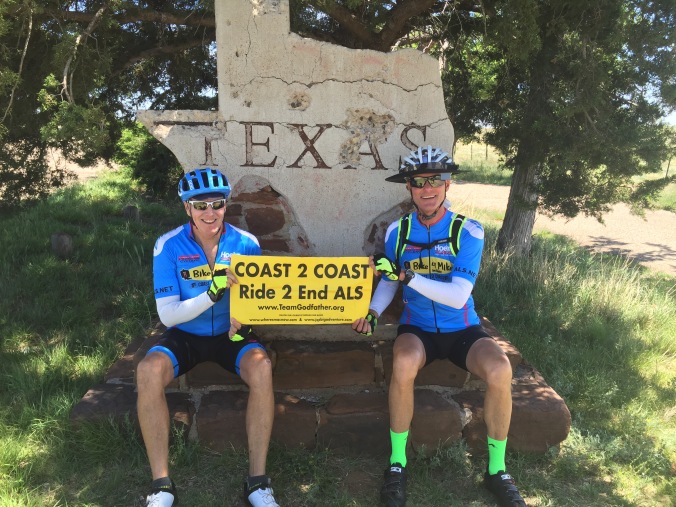 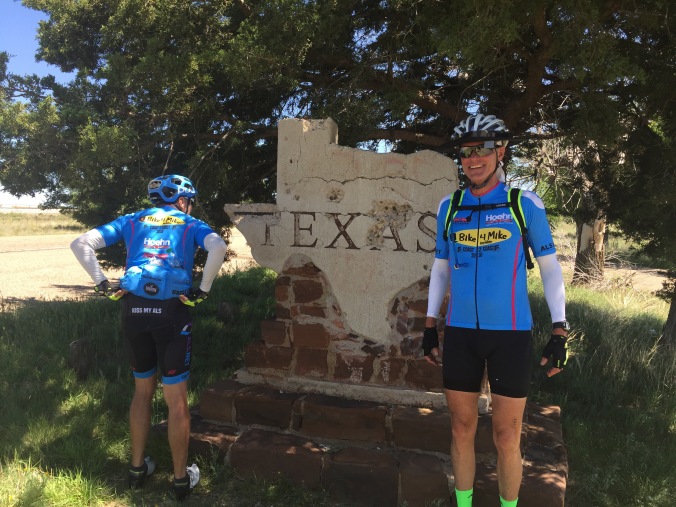 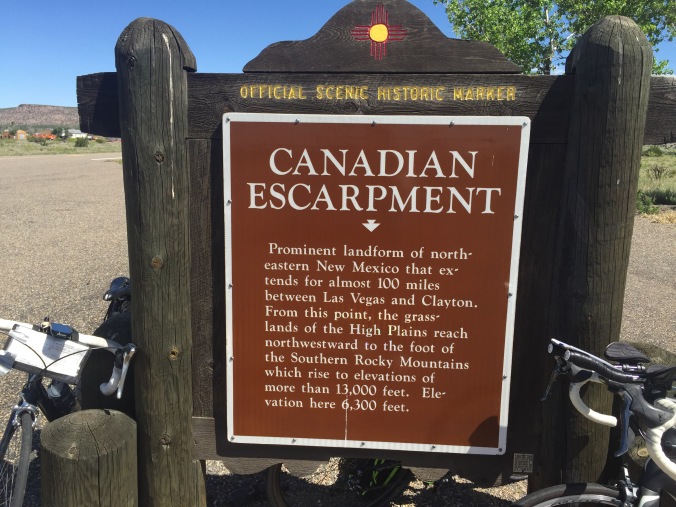 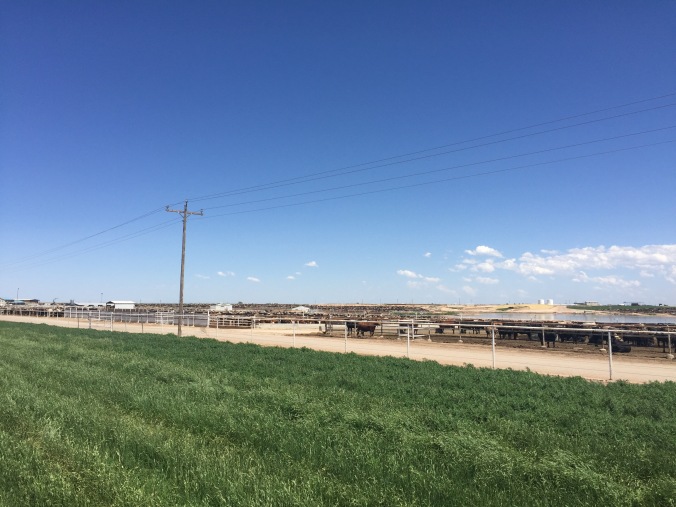 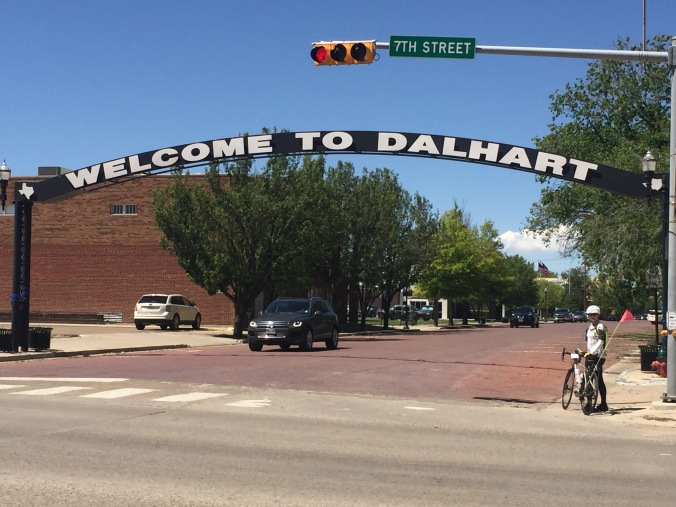 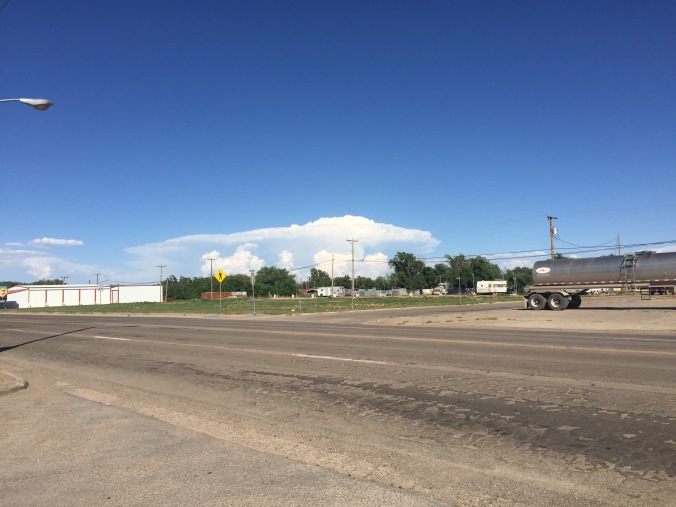 One thought on “I got screwed today”